Melvins/Hammerhead Picture Discs on-sale tonight & MANCHILD 6 is out now too!

The amazing picture discs AmRep has put together for the upcoming art shows in L.A. and New York are going to be available in limited quantities tonight at 6PM Central Time. This will likely sell out quickly as the entire amount obviously won't be put on sale before the art show and the bands will be getting some too to sell at shows etc.

Split 7" picture disc made in conjunction with the "Post-Moral Neanderthal Retardist Pornography" art shows in LA & NYC.  5, count 'em 5, different variant artwork by the likes of Camille Rose Garcia, Shepard Fairey, Junko Mizuno, Chris Mars & Haze-XXL. 2500 total of this release with 500 pressed of each design. First person to complain they are sold out because they didn't read this, we're sending AmRep over to your house to punch you in the throat.

Friend to Melvins and Melvins-Fan alike, the prolific Brian Walsby has released his new book, the latest in his series - MANCHILD 6 Check it out! 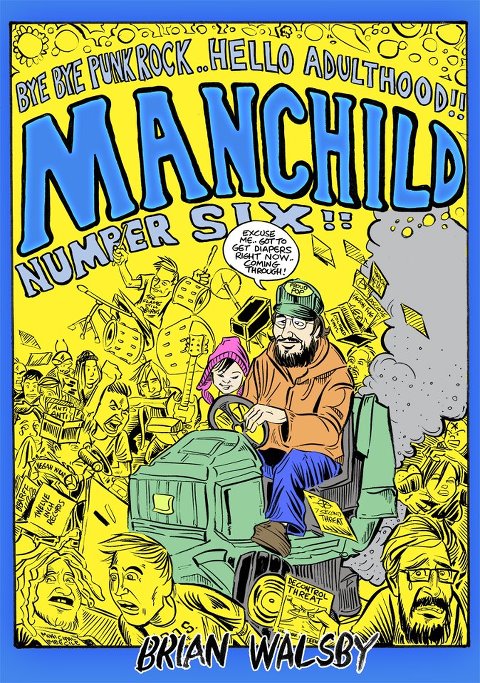 After finally being suckered into fatherhood with the birth of his daughter Willow, Brian Walsby finally says, “goodbye punk rock, hello ad...ulthood” with the release of MANCHILD 6. Joining the ride is new publisher Will Butler of To Live a Lie Records. Will somehow believed in Brian enough to spend his own money on someone who obviously is out of touch, has betrayed the scene (any scene, take your pick) and has more or less moved on. Or has he?

Despite the nonstop demands of diapers, real life responsibilities and taking the six year old Noble to school most of the time Brian has still somehow found precious time in coming up with new work. Filling out MANCHILD 6 are exclusive interviews straight from Brian’s blog (INTROVERTED LOUDMOUTH) from the last couple of years with lengthy interviews with Richmond’s TANNON PENLAND (LOINCLOTH), Raleigh’s own incredible songwriter KENNY ROBY, The split personality of SCOTT RADINSKY (PULLEY, TEN FOOT POLE, SCARED STRAIGHT) , guitarist for the DESCENDENTS and ALL STEPHEN EGERTON and a lengthy tour diary on the road with MELVINS right before Willow was born. Lots of good reading.

So if you are at all interested in punk rock, fatherhood, MELVINS, potshots at people who deserve it, Mad magazine type satire and all of the other things that Brian Walsby is known for, MANCHILD 6 is a must have and a fine addition to a growing collection of hard work.

On May 21st NBC's 'Last Call w/ Carson Daly' featured a couple more songs from the Melvins show at the Troubadour in L.A. on April 13th.

Spin & The Melvins released a sneak peak, Leon vs. The Revolution, Track 6 from Freak Puke which is due out June 5th.

Secret Serpents posted images and in some cases purchase links of the tour poster series they put together for the Melvins/Unsane tour this spring.