The Melvins - Live at Third Man Records out NOW!

Speaking of buying things, the Melvins have opened up a new online shop where you can get a few of their more recent t-shirt designs, check it out at themelvins.revolvemerchandise.com

More good news on the LIVE Melvins front for those in the southern hemisphere, they have just announced an Australia/New Zealand tour w/ Helmet! To commemorate this illustrious pairing there's gonna be a split 7". Like old times for both bands, the single is coming out on AmRep with a HAZE XXL cover. Sneak peak...

Dale's side project Altamont is releasing a new 7" on Valley King Reocords entitled Mrs. Creech. This is Altamont's first release since 2005 and includes Coady Willis and Toshi Kasai! In addition to the 7" they've also got stickers and t-shirts. More info HERE!

The Melvins are set to release Tres Cabrones, a 12-song release that finds Buzz Osborne and Dale Crover reuniting with original drummer Mike Dillard, on Nov. 5 via Ipecac Recordings.

“Tres Cabrones is as close as we’re willing to get to the Melvins 1983 line-up,” explained Osborne.  “The best part is it’s all new songs.  I specifically wrote tunes that would be good for these guys to play and it worked out great.  We had no interest in rehashing tunes we wrote 30 years ago and chose instead to simply create NEW songs.  It worked out perfectly.”

“Making the Tres Cabrones record was a real treat indeed. It’s a trip down memory lane complete with debauchery and ultra violence, ” said Dillard, who left the band in 1984 only to be replaced by Crover.

“After 30 years we release a record with the (almost) original line-up of the band,” added Crover.  “I’ve always felt that drummer Mike Dillard was one of us.  It’s great that he’s still a piece of the puzzle!  Plus, I get to see what it’s like being the bass player in the Melvins!  Tres Cabrones indeed!” 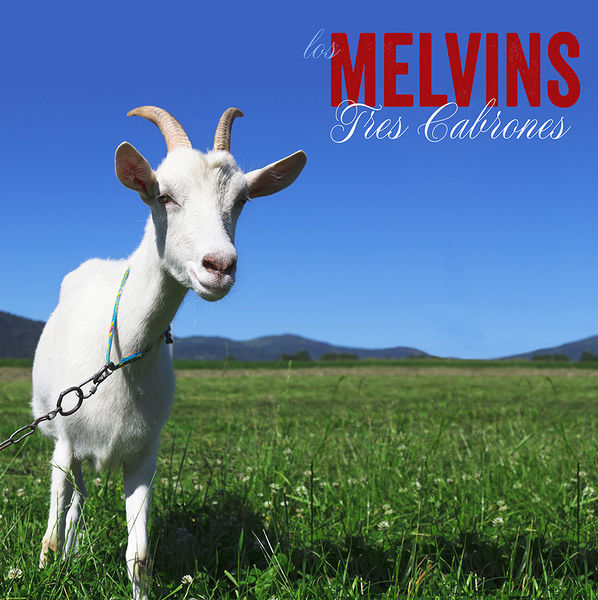 The Melvins are currently in the midst of their 30th Anniversary Tour in their ongoing four-piece iteration (father-to-be Jared Warren is on paternity leave with Butthole Surfers’ bass player Jeff Pinkus filling in).

The Onion A.V. Club recorded an epic video of the 30th Anniversary Tour lineup performing 'Graveyard' by the Butthole Surfers in Chicago for a crowd of adoring ice cream fans!

Melvins 30th Anniversary Tour begins in less than a month!

Melvins just wrapped up an extensive European tour as well as U.S. performances at Maryland Death Fest and Jack White’s Third Man Records The show at third man records was recorded at least in part direct to acetate and will be released on vinyl later this year. Side A of the album is apparently a 21-minute version of Charmicarmicat off of Eggnog. The band has also released a new song titled “Dr. Mule” via Scion A/V and Pitchfork which can be downloaded below:

Next up for the Melvins is their 30th Anniversary Tour, which kicks off on July 12 at The Crescent Ballroom in Phoenix, Ariz.   Joining Buzz Osborne, Dale Crover and Coady Willis will be Butthole Surfers’ bass player Jeff Pinkus, temporarily filling in for Jared Warren who will be on paternity leave.

"Has it really only been 30 years?” asked singer/guitar player Buzz Osborne. “Dang!  Thanks to everyone who’s been there for us!  It’s been an exciting trip and I probably should have listened and learned more.  I apologize for anything I’ve ever done wrong and for anything I’m going to do wrong… Ha!”

The Melvins have added a July 31 Vans House Party performance to their upcoming 30th Anniversary Tour. The date is a free performance with would-be attendees asked to RSVP beginning July 15 via houseofvans.queueapp.com. The band’s July 20 Minneapolis date at Bash 13 (Grumpy’s) will also feature Mudhoney, Die Kreuzen and Negative Approach.  Three additional headlining dates have also recently been confirmed for the tour: Aug. 23 in Sacramento (Ace of Spades), Aug. 26 in San Diego (The Casbah) and Aug. 27 in Pioneertown (Pappy & Harriet's). Check the Tour Dates for the full list of dates.

As usual, lots of great stuff will be released in conjunction with the band's performance in the Midwest Melvins Mecca that is Minneapolis. So far we know there will be the first part of a 9-part singles series of tribute covers, a new Melvins 1983 7", t-shirts, buttons, and a 10" compilation of all the bands performing at the Bash. Below is the Melvins contribution to the comp, American Cow.

8 Modern Bands That Influence the Melvins via MTV

Splatt Gallery in Walled Lake, MI has what I'm confident in saying is the largest amount of Melvins shows poster art ever assembled in one place on exhibition right now! I went through it recently and recommend it to anyone who will be near the Detroit area this summer. Check out their facebook page for lots of shots of the exhibition. Read below for the press release...

The Melvins, unknown to the masses, and unfathomable to the mainstream, ARE America’s greatest metal band, and hence… our greatest RAWK band.

They’ve been at it now for thirty (30!) years, have released at least that many albums (plus a multitude of singles, collaborations, and special “projects”), and have incessantly played thousands of shows on (Guinness World) record-breaking tours.

You may never have heard of them, but all the bands you like certainly have.

At the beginning of their career, (the) Melvins invented what has now become an entire genre of music inadequately, despairingly, and perfectly coined as “drone” or “stoner metal”. But they didn’t stop (or really even start) there. Melvins music blends elements of the blues, free jazz, vaudeville comedy, hi-energy rock ‘n’ roll, stadium-sized anthems, heavy metal, punk rock, show tunes, electronica, found sounds, musique concrete, and experimental noise. For the most part, it’s LOUD.

And like all better things in life, (the) Melvins keep getting better. We don’t toss the label “America’s Best Band” around lightly (R.I.P. Ramones, Capt Beefheart). Now, if you’ve got ears, you’ve got to listen.

Just as with their music, (the) Melvins aesthetic, as displayed by their album art, song titles, stage presence, and merchandise (what other band has offered two-headed baby dolls?) ranges from the gutter to the stars. There’s a reason why nearly all of the artists that we feature at Splatt Gallery have done work for (the) Melvins. Stylistically, it’s across the boards, but the underlying theme is FUN- the creative joy of having no boundaries, with a healthy prescription of not taking one’s self too seriously.

Baseball, hot dogs, hot rods, and pizza pie – American culture of the sixties filtered through the Reagan years where hippie idealism was discarded while B-grade nostalgia became exalted – all this, and more, will find its way into The Art of (the) Melvins. The new exhibit at Splatt Gallery, featuring well over 100 original Melvins concert posters, is sensory overload, from vivid Day-Glow Technicolor to dark Gothic undertones… oh, the horror, the horror.

The Art of (the) Melvins will be on display at Splatt Gallery, Walled Lake, Michigan through-out the Summer 2013. 301 Legato Drive, Walled Lake, MI  48390

The polls have closed and the results have been verified by an independent third party: EVERYBODY LOVES SAUSAGES!!! To prove it the Melvins released their new covers album TODAY! Swing on down to your local record butcher to pick up a copy. SPIN has the entire album up for streaming, and Buzz has provided written commentary alongside each track. To add to the fun, the Melvins have also announced the tour dates for their 30th Anniversary Extravaganza Tour, check them out below. One of the tracks on the album is Romance by Tales of Terror and was recorded with the Melvins Lite lineup, here's what Buzz had to say about it: "I saw Tales of Terror a bunch of times in the early '80s, before they had actually put out that album [1984's Tales of Terror]. So I was a converted fan before they recorded anything. And once I got that record, I just thought it was great. As it turns out, they only printed 5000 LP's. It's never come out on fuckin' CD. That's insane. To me, that's one of the best records to ever come out of California. It's fucking amazing. And nobody cares. Unbelievable. Their whole thing is completely tragic. The band ended because one of the guitar players got beaten to death in Sacramento. And then the bass player, years later, overdosed on methadone, I think. And I think the singer was so messed up on drugs that now he has to live in an assisted living place. That's rock and roll. That's it, right in a nutshell. "Played with needles just a little too much." There it is. For one shining moment, these guys had it together, and they did it, and it's amazing."

Melvins have announced the dates for their spring tour, including a month in Europe playing both Melvins Lite and some Residency shows with the full lineup! Vice's Noisey also premiered a new track today from the forthcoming covers album Everybody Loves Sausages, Queen's "You're My Best Friend" which features guest vocals from Caleb Benjamin of Tweak Bird.

Ever wanted to ask KING BUZZO a question? Guitar World is giving you what may be your one and only shot. (It's not a wig)

Jeff Pinkus of the Butthole Surfers & Honky spoke to the Austin Chronicle about his recent collaboration with the Melvins and their soon to be released EP entitled 'PINKUS':

MNoriginal did a great feature on Tom Hazelmeyer, the Dear Leader of Amphetamine Reptile Records...