Today marks the official release date of Five Legged Dog, the 36 song 2CD/4LP collection of acoustic versions of Melvins classics and along with a few choice covers! This all acoustic album is a true retrospective spanning their entire career and is out now on CD and digitally. The 4LP colored vinyl from Ipecac is currently set for a January 28, 2022 release date.

Five Legged Dog Press Release:
Where to begin with a new Melvins release? August 24, in the year 79 A.D. seems as good a place as any. On this day, citizens of Pompeii emerged squinting from their villas, fell knee-bound and, drawing panicked eyeballs skyward, watched as money shots of glowing lava spewed down upon them, flash frying bodies in suspended animation. Had the Melvins been there on that fateful day they surely would have scoffed, simply cracked free of their lava encasing, belched out a plume of ash and gone on their merry way, refusing to be frozen - or sticking with the metaphor - burned in an instance of time.

It’s not that the Melvins are timeless, nothing so anodyne or sentimental as that. Their latest offering, the acoustic retrospective, Five Legged Dog, finds the Melvins unstuck in time, the musical version of Vonnegut’s Billy Pilgrim, quantum-vaulting between eras and eardrums. At once going forwards and backwards. Is it mere coincidence the album's epicenter should be a rendering of the Stones’ rocker, “Sway,” with conspicuous keystone lyrics, “ Did you ever wake up to find / A day that broke up your mind / Destroyed your notion of circular time….” There it is, plain as Pompeii.

Move now from 79 A.D. to 1979 A.D., the catastrophic era of disco denim stuffed with schlong, and continue right up to today. Somewhere between those encrusted epochs of banker-rock, a vein of music materialized where ego and orthodoxy were anathema. Of all the lies here told, this is none of them: The Melvins gave birth to that age. Hardcore punk was the semen and heavy metal the swampy bush of this unholy conception. Both an aesthetic and an ethic is what it takes to define an age. And during a near 40-year shelf-life, the Melvins continue to dazzle, confuse and confound. Five Legged Dog is a four album beast, a testament to their unmatched work ethic, their penchant for pushing the envelope, then shredding it to bits. Said Melvins founder, Buzz Osborne, “One acoustic record seems like a joke and two is pretty normal, but doing FOUR?!? That’s like going to war against an army of gorillas on LSD.”

Long before Seattle burned under its own pyrocumulonimbus lightning fires there was Osborne and drummer, Dale Crover, from working-class Montesano and Aberdeen respectively. Multiple (trusted) sources confirm that the two met while rat-holing their way into local opium dens, sidling up to mourning widows and desultory loggers on the nod to relieve them of their pocket change. It was by this method that they amassed enough money to rent their first instruments. But their music initially took a back seat to academia when they were both accepted into the prestigious Bushwood Academy of Technology and engrossed themselves in an emerging field of physics known as T-symmetry, the scientific rule that dictates time runs differently backwards than it does forwards. Imagine an oak tree slowly descending into the ground, or a demolished building heaving upward and settling in full pristine form. Though a career in physics was not meant to be, the principal of T-symmetry had a profound effect on them, and out of this, the Melvins and their musical space-time fuckery, was born. And if this ain’t the truth, pardner, then God’s a penguin.    The Melvins rudder has been their love of other bands, always fans of the good shit. They were unabashedly Kids In Satan's Service. But not just KISS... The Who, Throbbing Gristle, Butthole Surfers, Blondie, Flipper and the unfathomable bathysphere of electroacoustic noise... Melvins loved those bands the way you love your oxygen. And after all this time, they breathe that music still. The more mordant their cover renditions have been, the deeper the Melvins' sound has plumbed, until all familiars are hidden, then resolved as newly slabbed granite so massive that to dismantle it into its separate sources is unimaginable. Few artists work so hard at exceeding limits, fewer still follow absurdity past all reason and yet, mile upon mile Melvins strike fertile soil of sound and conceptual fury. And with this album Osborne aimed to make a statement. “This a big one. We knew we had to do something massive to prove we weren’t fucking around.”

According to Crover, “These four albums represent a career retrospective.” Indeed, Five Legged Dog takes a measured sampling of their recorded works, alternating selections from Big Business-era albums, Nude With Boots, The Bride Screamed Murder, (A) Senile Animal, and the tragically under-appreciated Bulls and Bees, and pairing them with ancient pagan favorites Stoner Witch, Honky and Houdini (whose iconic album cover, curiously, depicts a two-headed mutt, no doubt the same rabid bitch that years later spawned this eponymous five-legged dog). Melvins diehards will foam at the 36-song track list which includes “Edgar The Elephant,” “Revolve,” “The Bit,” “Hooch,” “Anaconda,” “Billy Fish,” as well as a no-way-they-can-do-that-acoustically version of “Honey Bucket.”

But know this, the acoustic designation is a misnomer, this is not a lighter, more pensive Melvins by any stretch. No wistful preening. These songs are delta variants, weighty, plangent, cavernous, and often brutal renditions. Not since Townshend, has anyone so successfully transmuted an acoustic guitar into a percussion instrument as does Buzz. On “The Pitfalls in Serving Warrants,” his strumming is precise, immediate and determined. Later Buzz deftly shifts into a roiling version of “Prig,” which would make the perfect complement to an afternoon spent sipping soma in the shade. His guitar strumming often gallops in tandem with Crover, who, for the album’s entirety, decided to scrap traditional wooden drum sticks to compliment the album’s authentic undertones. “I used brush sticks on every track. What a pain in the ass!” But Crover nevertheless manages to blast through tunnels with those brushes. Four-string virtuoso, Steven McDonald, rounds out the trio with his wholly unique bass lines. But it’s McDonald’s ability for vocal harmonizing that contributes to the album’s haunting atmosphere. “We knew the singing was going to sell this thing,” said Crover. However, initially the idea of doing a completely acoustic retrospective was met with McDonald’s raised brow. “But once I got into the concept I was hooked to the eyeballs. I think this came out really great! It’s some of my best bass playing and singing. I got to sing ‘Sway’ by the Stones, and they even wanted to do a cover of ‘Charlie’ by my main band, Redd Kross!”

In addition to ”Charlie” and “Sway,” other covers on the album include a reverential version of Alice Cooper’s “Halo of Flies.” And sticking with flies, Melvins’ staple, “Eye Flys” ends with a slow marching cover of “Woman” by Free. Another highlight, this one tinted with country-western vocal fry, includes past Melvins bassist, Jeff Pinkus wringing undiscovered pathos from the Fred Neil classic “Everybody’s Talkin’.” The song evokes a fleeting taste of The Melvins had they taken up residence in the shit-kicker bars of Bakersfield circa 1952, or rather, if Buck, Wynn, and Hag cut their teeth on punk rock and acid. Buzz agrees, “JD Pinkus does a fantastic job! His kind of insanity fits right in!”

So here we are. A four-album acoustic retrospective that somehow evades nostalgia. Did you expect, something predictable? This is The Melvins, after-all. Keep an eye out for this Five Legged Dog, this frothing mongrel, as it stalks roadside, ready to kill or maim to protect its maggot-covered bone. Unless you’re lookin' to get down and make puppies. 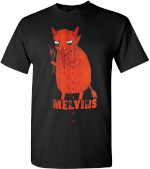 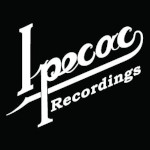