The new Melvins live album Sugar Daddy Live is out now, swing on down to your local record shop and pick up a few. The recording comes from their fabled appearance at the Busta-Guts Club in Downey, CA. If you're one of those fence riders, AOL Music for a limited time has the album streaming in its entirety...

The U.S. residency mini tour is about halfway done, if you're in Chicago, Boston, NYC, or MPLS be sure to check them out and pick up one of the amazing customized for the city Endless Residency Box Sets. The 4 CD set was recorded live in L.A. in Jan. during the Spaceland Residency. It's the same 4 sets we're playing live on this 7 city tour. There's 50 sets individualized for each city. All hand printed and hand assembled and numbered. Design, art, and printing by Mackie and on Amphetamine Reptile Records. They're $50 apiece. That $12.50 a CD so quit bellyaching about the price already!
While in New York City the band will be stopping by Tara McPherson's store Cotton Candy Machine for a show poster signing/release event. They've also released a Melvins T-shirt with her design, but it appears to only be available in children's and women's sizes at this time.
The Melvins will be playing Sunset Junction Street Fair in L.A. on August 27th. Additionally, Buzz & Dale have mentioned recently that they'll be doing some 'Melvins-Lite' dates w/ Trevor Dunn while Big Business is on tour this summer. So far California dates in San Diego, Costa Mesa & San Luis Obispo have been announced. Speaking of the Biz, Stereogum preimered "Always Never Know When To Quit", a track from their forthcoming 'Quadruple Single'.

Poster by Jeff LaChance
Dale was interviewed on the Howard Stern show recently.
The Village Voice had a great article about the importance of the Lysol album.
Search & Destroy did a nice long video interview with Buzz & Dale while they were in Mexico.
Buzz was interviewed on theFive10.com radio.
Yowie.com did a 'webcam show' between the Melvins and some of their fans. The lag is something to behold.
Other recent Melvins interviews: The Stranger | UGO.com |  City Arts | Sound Spike | The Boston Phoenix | The Boston Globe |

Melvins/JSBX "Black Betty" 7" coming out in May plus Grumpy's Date announced!

Amrep will be putting out a split 7" with the Melvins and the Jon Spencer Blues Explosion cover "Black Betty" this May and should be available at the upcoming tour dates. No word yet on what the edition will be of this. "AmRep will be making as many as we can stuff by ourselves. We are old and feeble. Do the math." The Jon Spencer version was actually used in a Volkswagen commercial during the Super Bowl of all places.

In more Amrep/Grumpy's news Melvins added Minneapolis to its list of Residency Tour stops. They'll be playing June 13 & 14, 2 sets each night. You can purchase tickets for the event from Eventbrite.

Buzz and Dale will be doing a live video Q&A with fans on Yowie.com on May 24th.

Amazon has posted 30-second samples of the Melvins upcoming live album 'Sugar Daddy Live' which is set to be released on May 31st.

KEXP 90.3 FM in Seattle did a short radio documentary on the Melvins recently.

Melvins will be taking their residency series on the road

the Melvins will be taking their January residency series from the Spaceland in Los Angeles on the road to six U.S. cities. The performances will feature the same set list in each city. The first night's first set will include songs from Lysol and Eggnog followed by a second set of cuts from Houdini. Then, the second night's first set will feature Bullhead in its entirety with Stoner Witch closing out the evening.

Dates for U.S. Residency tour. No opening acts on the tour.

Additionally, the Mexico City show that was originally scheduled to take place in March but was postponed due to Dale's injury during the Japan earthquake has been rescheduled for May 3.

Amrep continues to release new versions of the limited The Bride Screamed Murder vinyl. The pressing on this LP was limited to just 1000 copies & are in white vinyl that splattered with red/orange/yellow streaks. To make things even more special, 10 artists were commissioned to create artwork for the letterpress print that's affixed to the back of the sleeve with each design being limited to just 100 copies. There are still 4 artists remaining so keep checking back at amphetaminereptile.com/melvins/ for updates on this release. Melvins are also likely going to have copies of this release available while on tour.

Dale is appearing on the cover of Modern Drummer for their May edition. You can purchase the issue. Here is the interview.

Buzz was interviewed for a documentary on Ministry titled Fix.

Melvins will be releasing a new live album entitled "Sugar Daddy Live" May 31st on Ipecac Recordings. According to the press release this was recorded on an undisclosed date at the 'Busta-Guts' club in Downey, CA. The tracklisting below looks to be a selection of songs performed on their 2008 tour.

L.A. TIMES: short interview with Buzz recounting the experiences of being in the recent New Zealand and Japan Earthquakes
Here is the official press release sent through by the promoter regarding The Melvins and High on Fire Tour of New Zealand as of 4pm Tuesday 22nd February:

As everyone is now acutely aware, the city of Christchurch was struck by a 6.3 magnitude earthquake today which has claimed several lives already and completely incapacitated the city's infrastructure.

The Melvins and High On Fire tour party were one minute into checking in for our flight to Wellington when the earthquake struck. The airport was immediately evacuated. We have become subsequently stranded at the Air New Zealand office complex, completely unable to get out of the airport or secure accommodation. We have tried desperately to secure transport to the Wellington show, but regrettably all our options have been exhausted and we are now confronting the reality that we will be spending the night at the airport in Christchurch.

We are currently making plans to move the scheduled Wellington show at Bodega to tomorrow night, Wednesday February 23rd. Additionally, we are looking at having Kylesa play a headliner show at Whammy Bar in Auckland on the same night, and for the scheduled Melvins/High On Fire/Kylesa Whammy Bar show to be moved to Thursday February 24th. Unfortunately, until we know more about our travel plans, we are unable to confirm that these scenarios will become a reality. However, the attitude in the tour camp is very much one of "the show must go on" and we are doing our damndest to make a revised tour schedule work.

We ask that all ticket holders bare with us at this time while we can solidify our plans and work towards the aforementioned backup option. Regrettably we have no further information at this time regarding this and we would like to dearly thank all ticket-holders in advance for their patience and understanding.

We are very shaken, but are all healthy and not injured. Needless to say this has been a very stressful time but we are trying to keep our spirits up. The three shows on the tour so far have been amazing and the Melvins and High On Fire guys are fortunately an amazingly understanding and friendly bunch of guys who have been an absolute joy to work with.

Our thoughts go out to all the people of Christchurch who have already been through such agony recently and are now going through much worse. To those who have lost loved ones in particular, our deepest sympathies.

We hope to update the situation soon and again thank you for your patience.

Please feel free to distribute this press release to any and all interested parties. Please also be aware that our communication options right now are limited and to be patient in light of this.

Melvins/AMREP are releasing The Bride Screamed Murder on vinyl this year in what looks to be a pressing of 1000 with each 100 being partially designed by a different artist of the band's choosing. The artist list is not fully fleshed out at this point as far as I know. Test pressings are already showing up on eBay to help offset the initial production costs. The vinyl will be a splattering of Orange/Red/Yellow on white. I suggest you keep an eye on the Amrep Bored for details on how to get yours as they become available to the public. Word is they'll also have some of the initial copies available in time for their Spaceland residency shows this month.

Our good friend Brian Walsby recently designed a new Melvins t-shirt based on a familiar theme and it is available for purchase from Bifocal Media. They're also preparing to release the latest in Brian's 'Manchild' series on January 25th. For all the details visit bifocalmedia.com 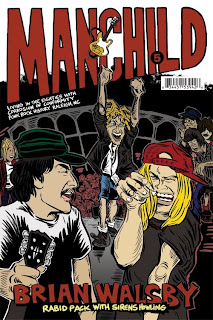 Many interviews with the band have been posted recently, here's the roundup:

Melvins playing every Friday in January at Spaceland in L.A.

The Melvins will be taking over Spaceland, performing each Friday throughout January with a different set and featured albums including the band's current line-up, a 1983 incarnation with Mike Dillard and several albums in their entirety.

Performance information is as follows:

You can also purchase the posters from the residency individually or as a series from La-La Land Posters. Artwork by Kii Arens