Crystal Fairy announced today their first series of shows on the west coast to coincide with the release of their debut album on February 24th via Ipecac. The album is now up for pre-order on Ipecac's webstore in both CD/LP formats including a limited pink vinyl variant, as well as bundle options with a Crystal Fairy t-shirt. Additionally they also debuted Chiseler, a new song from the forthcoming album yesterday on Pitchfork.

Crystal Fairy is made up of Buzz and Dale from Melvins, Teri from Le Butcherettes and Omar from At The Drive In/Mars Volta.

Teri had this to say about Chiseler: "It was so much fun to write this song with Buzz, Omar and Dale. It literally just came out like a flying saucer while we were working the parts out for Chiseler. That same day we recorded everything. It was so impressive to see how well we all experiment with one another. While writing the lyrics for this one, I completely let my hand do the story telling... the unconscious is sometimes wiser than our premeditated thoughts."

Crystal Fairy is featured on the cover of the latest edition of New Noise magazine, order it here.

Poster art by Pedro Mendoza (these tour dates have been canceled)

Melvins just announced the existence of Crystal Fairy, a new project they've started along with Teri from Le Butcherettes and Omar Rodríguez-López of Mars Volta/At the Drive-In. Amrep will be releasing a 7" with two songs on October 10th via Shoxop, and Ipecac will be releasing a full length from the new band on February 24th, 2017! Check out "Drugs on the Bus", a track from the 7" below!

“When the Melvins toured with Le Butcherettes, Teri would come out at the end of the set and do ‘Rebel Girl’ with us. It was almost always the highlight of the show!  From doing that, we knew there was some chemistry between us that was worth exploring. We became close friends with both Teri and Omar on the tour and came up with the idea of starting a new band with them." - Dale

“The Melvins have had many different line-ups, and we’ll continue to mix things up but with Crystal Fairy, working with Teri and Omar, I know this was something different and deserved to have its own identity.” - Buzz

“Omar caught up with us on the Melvins’ tour because he is an admirer. Through the travels, the Melvins and Omar connected as well. Sometimes, Omar and I would fantasize loudly of hopefully being able to form a power together. Before we knew it, we were writing music in the studio (both in El Paso and L.A.) and birthed a magical little gem that I am extremely proud to be a part of.” - Teri

“While our main bands will still remain our focus and priority, we intend to have as much fun as possible recording and touring with this special and unique project." - Omar

Melvins will be playing a couple shows at the end of the year along with Redd Kross & OFF! and two other shows in January along Sleep!

I'm really excited to announce a new Melvins cassette that I'm releasing along with my friend Joe's record label Small Doses! On February 8, 2003, Melvins performed live to accompany Cameron Jamie's Super 8 Film BB at the Walker Art Center in Minneapolis. They performed the score twice, each time offering a unique take on the songs Hung Bunny and Roman Dog Bird from the legendary Lysol record. Both performances are featured on this release. The audio was mastered for cassette by James Plotkin and the tapes were professionally duplicated onto the highest quality chrome plus tape. The music sounds amazing and massive. The cassettes are packaged in a custom, letterpress printed, die cut box made by Stumptown Printers in Portland, Oregon. There are 15 different cassette shell colors dispersed in the run. Each of the 500 tapes features a unique cover image – no two are alike!

The Melvins' Hung Bunny/Roman Dog Bird cassette will make its debut at the Prick release party on August 11, 2016 at Grumpy's in Minneapolis. Melvins will have them on subsequent tour dates as well. The majority of the run will be sold in the shop at small-doses.com. UPDATE: The online sale begins on Sunday August 21st at Noon/12PM Central time.

This is a special release that I've been thinking about doing for a while now and came to fruition over the past few months after pulling the plan together and receiving the Melvins blessing. Aside from it being a great recording of a unique piece of music by the band, it also is a sort of personal celebration around the years of working on this site and the desire to put something like this out and share it with the people that have visited themelvins.net over the years, contributed to the wiki, and come together on the forum.

Cartoon Network announced that Buzz & Dale will be making appearances on their show Uncle Grandpa! The episode will air on August 4th at 7:30PM Eastern & Pacific. Buzz told Rolling Stone, “I LOVED seeing myself animated, it's the most reality I've had in a long time. These guys were so nice to us! They even allowed Dale and I to do the voiceovers sans pants!”  Dale added, "I always wanted to be in animation and do cartoon voices, so this is a dream come true for me. We look hilarious as cartoon characters and fit right in with Uncle Grandpa and his gang!" UPDATE: This has now aired and aside from reruns your best bet is to download the episode from either Amazon or iTunes! (It's episode 5 RV Olympics/Uncle Melvins)

Amrep will have these re-issue 12"s of Stoner Witch & Prick with exclusive linocut art by HAZE XXL for sale along with some other goodies at the Prick Release Party at Grumpy's in Minneapolis on August 11th!

Melvins are heading out on the road again in the U.S. on August 3rd and among those dates they'll be headlining and performing on Sept. 3rd at the MUDDY ROOTS MUSIC FESTIVAL  along with Del McCoury Band, Bonnie Prince Billy, Split Lip Rayfield, The Monsters, The Reverend Peyton’s Big Damn Band, Slim Cessna’s Auto Club, The Tillers + 50 more bands. SEPT 2-5 at Junebug Boogie Ranch, Cookeville, TN. Buy your tickets online - muddyrootsrecords.com

Check out the new music video for Hideous Woman from the recently released Basses Loaded album! This is a video that I think John Waters would approve, it was directed by David Hall and I would recommend you view it after your food has settled...

Screenings of The Colossus of Destiny - the new Melvins documentary have been announced for San Francisco, Portland, Seattle, Los Angeles in July and Minneapolis and Las Vegas in August. More to come. Check out their screenings page for details. To really stay up to date, keep an eye on their Facebook page if you've waded into the social media waters.

Team Rock recently published Buzz's list of his favorite Melvins albums, with a discography the size of the Melvins it'd be hard to find two fans with an identical list!

Big Business' new album Command Your Weather is coming out via Joyful Noise on July 8th. It's a good one and it's streaming early via Noisey! They're also in the midst of a tour, check the dates here. 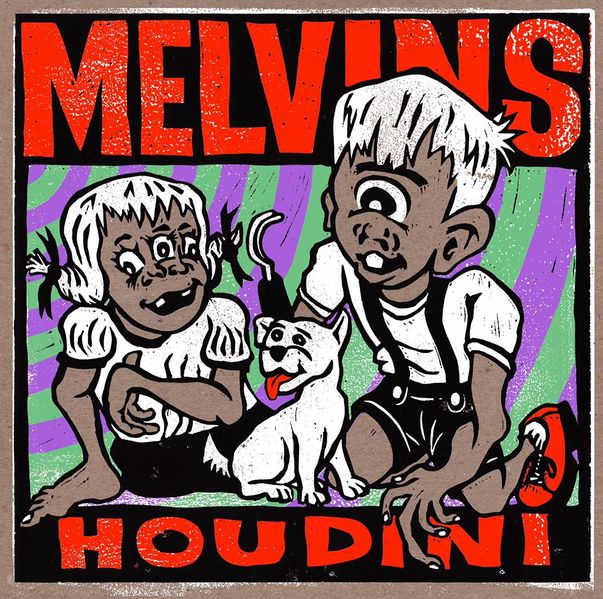 Cover for the new art edition of the Houdini vinyl reissue, available first at the Prick Release Party in Minneapolis!
HAZE XXL linocut art design silk screened, based off the Frank Kozik original.

Third Man Records announced today that they will be releasing the long rumored reissues of the Atlantic Records era Melvins albums on vinyl on June 24th! Third Man has begun taking pre-orders for the black vinyl version of these reissues including a bundle package for all 3, the colored vinyl details will be released at a later date.

"Houdini, Stoner Witch, and Stag have all been out of print on vinyl for over two decades and original copies can command into the three figures in back alley craps games. Third Man Records is proud to reintroduce these titles to the hungry vinyl-buying public, all remastered from original analog tapes, pressed on 180-gram vinyl and given the deluxe, gatefold jacket treatment."

TMR-295 Houdini
Signed to Atlantic Records in the hubbub after Nirvana’s Nevermind exploded, the Melvins’ fifth album Houdini was a conscious attempt by the band to make a record that wouldn’t alienate their fans but that the band members themselves would also enjoy. Their best-selling release by a country-mile, this album crested at number 29 on on the Billboard Heatseekers chart. Houdini would be most folks introduction to the band and songs like “Honeybucket” received MTV airplay.

TMR-296 Stoner Witch
The stellar seventh studio album by the Melvins is one of the most cohesive and beloved in the band’s catalog. With fan favorites like “Revolve” and “Queen” balanced with the impressive sound explorations of “Lividity” and “Shevil” and the result is one of the most praised albums of the band’s 30+ year career.

TMR-297 Stag
The final album in the Melvins major label span, Stag finds the band fully spreading their wings (and budget) to create what is arguably their most wide-ranging and diverse album among the nearly two-dozen full-length studio albums the band has released since 1987.

Keep in mind that the colored vinyl shown in this teaser is not up for sale yet, black vinyl only!