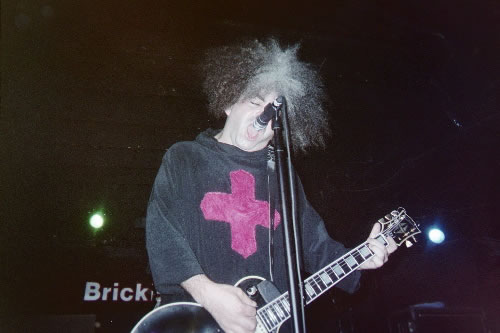 Buzz Osborne (b. 1964), also known as King Buzzo, (birth name Roger Osborne) is the guitarist/vocalist/songwriter and technically the only remaining founding member of The Melvins. Buzz Osborne is also a founding member/guitarist for both Fantômas and Venomous Concept.

In the early 1980s Osborne founded The Melvins with Matt Lukin and Mike Dillard who all went to Montesano high-school where he graduated in 1982. In the beginning The Melvins played The Who and Jimi Hendrix covers but began playing fast hardcore punk after Buzz was introduced to bands such as Black Flag, Flipper, and Millions of Dead Cops by a friend from out of state. When Dillard left the band in 1984, Dale Crover was recruited out of an Iron Maiden-cover band and the band's rehearsals moved to a back room of Crover's parents house in Aberdeen, Washington. It was soon that they also started to play slower and "heavier" songs than nearly anybody else did at the time.

In 1986 the band released their Six Songs EP on C/Z Records (later rereleased as 10 Songs and as 26 Songs in 2003 on Ipecac Recordings) that was recorded live to a two track at Ironwood, February 8, 1986. In December of 1986 they recorded their first full album Gluey Porch Treatments, at Studio D in Sausalito, California, that came out in 1987 on Alchemy Records (later rereleased as a bonus on the CD version of their second album Ozma on Boner Records and in 1999 on Ipecac Recordings with some garage demos).

During 1988 Osborne and Crover relocated to San Francisco, California where the band recorded their next album, Ozma, in May 1989, and it came out later that year. In 1990, Nirvana was without a drummer, and Crover helped out by playing on a brief west coast tour with Sonic Youth. Osborne gave Dave Grohl from Scream the phone number of Nirvana bassist Krist Novoselic; Grohl later became Nirvana's full-time drummer.

After finishing the work on the Bullhead album, the band then toured Europe and their January 23, 1991 show in Alzey, Germany was released as Your Choice Live Series Vol.12, without the song It's Shoved that appeared on the It's Your Choice compilation. When they returned they recorded their next album, Eggnog, that was released the same year on Boner Records.

In 1997 he appeared in the promo video for The Offspring's video "All I Want", as a masked pianist. Buzz also appears in the 1994 video for the Beck song Beercan which samples the Melvins' song Hogleg.

Osborne now lives in Hollywood with his wife Mackie Osborne.